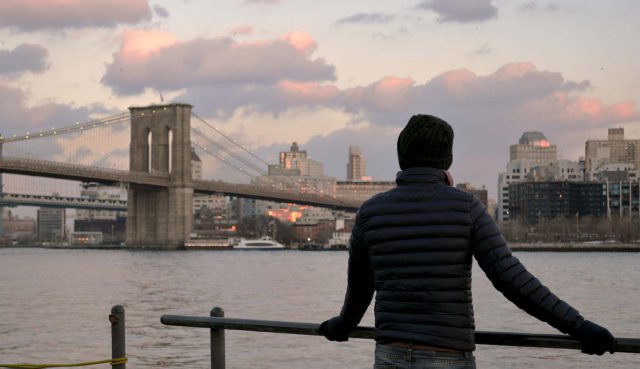 Woody Allen once joked that, “New York is just like everywhere else, except more so.” New York does have more people, more restaurants, more diversity, and even more pigeons compared to most of the rest of the world. I grew up in uptown Manhattan right on Broadway, and take it from me, more doesn’t always mean better. New York apartments are so tiny you feel like a sardine living in a can. This is good preparation for the daily commute, when you’re squished into a metal cart twice a day. All New Yorkers know that proximity doesn’t necessarily curate intimacy.

A recent national survey exploring the impact of loneliness revealed that this condition is now at epidemic levels in the United States and poses a severe health risk to the general population. Survey results were released by Cigna, a global health service company. The survey was based on the UCLA loneliness scale, an instrument that measures and assesses subjective feelings of loneliness, as well as social isolation, by using a 20-item questionnaire. Four significant patterns related to feelings of loneliness and social isolation emerged from the survey of more than 20,000 U.S. adults, aged eighteen years and older:

The psalmist writes in Psalm 42:7 that the “deep calls unto the deep.” Sometimes many confuse this inconsolable longing as a form of chronic anxiety, or something gone wrong – but it is actually a holy haunting for the presence of God. The deep calling unto the deep is no other than the voice of God echoing from eternity.

Solomon tells us in Ecclesiastes that God has placed eternity in our hearts. Loneliness peels back the curtain of a time long past. It shows us intuitively what quantum physics is now confirming: that at a subatomic level everything and everyone is interconnected. Darrell Johnson, a long-time Professor at Regent College in Vancouver, and one of Bono’s favorite preachers, was studying to become a theoretical physicist before he was seized by the beauty of God’s transcendence. In Experiencing the Trinity, he writes:

For if, as Darrell Johnson suggests, the center of the universe is a relationship and the center of reality is Father, Son, and Holy Spirit, then the center of our lives will ring hollow until this eternal community is front and center in our lives.

Bob Dylan once said that New York is the only place where you can freeze to death on a busy street and no one would even notice. Although, urban centers are incredibly dense and swarming with people the density only seems to compound the loneliness. Thus, the confluence of urbanization and globalization is creating an expanding mission field for the church as most of the global population continues to migrate steadily into urban centers. Then what can we do?

First, recognize that loneliness is a signpost to something greater.

What then does the debilitating impact of loneliness unveil about what it means to be really human and the deepest human longing? In short, loneliness is a signpost to something chasmic. At the deepest level, the human heart aches for relationships more than anything else. This is because God himself is a community within the fellowship of the Trinity. We desire to be in communion because before the advent of creation itself, God was part of an eternal fellowship. This ache in the human heart is clear residual evidence that we were created from community and for community.

As part of NASA’s Child Star program, a student asked NASA scientists a question so seemingly rudimentary that the assistance of a “literal” rocket scientist in answering it felt more than a little unnecessary. “What is gravity?” the student asked. Shockingly, the NASA scientists shrugged:

NASA scientist 1: “We don’t really know: We can define what it is as a field of influence because we know how it operates in the universe.”

NASA scientist 2: “Actually, some scientists think that it is made up of particles called gravitons which travel at the speed of light.”

NASA scientist 1: “However, if we are to be honest, we do not know what gravity ‘is’ in any fundamental way—we only know how it behaves.”[3]

As Sir Isaac Newton discovered, gravity is a force of attraction that exists between any two masses, any two bodies, and any two particles. So too there exists a primal and intrinsic desire in the human heart to belong to a community. Although the struggle of loneliness itself is invisible to the naked eye, when we begin to explore the shocking distress that social isolation causes our basic biology at a fundamental level—we find that communal health and mental health are inextricably linked. At our core, the need to belong is what makes us human. It is as basic as our need for food and water, or at least that is what people realize when they’ve been deprived of such belonging. Consequently, it appears that community is not a pleasant luxury, but a prerequisite for survival.

RELATED: ‘He Gets Us’ in New York City – Ad Campaign Seeks to Disrupt Misconceptions about Jesus

At the deepest level, more than anything the human heart aches for relationship because God himself is a community within the fellowship of the Trinity. We desire to be in communion because before the advent creation itself God himself was part an eternal fellowship. This ache in the human heart is clear residual evidence that we were created from community for community.

Second, recognize that the current loneliness epidemic as a momentous gospel opportunity.

Another significant societal pattern related to feeling of loneliness and social isolation that emerged from the Cigna study is the designation that Generation Z (adults ages 18-22) is now considered to be the loneliness generation in history.[4]  Although Gen Z in the advent of social is perhaps the most connected generation technologically, they scored the highest on the UCLA loneliness scale. This is a significant discovery because it reveals that social interactions online cannot compensate for the need face to face interactions as a generation or as a society. As treatment for depression and anxiety reaches hyperbolic levels and suicide rates are skyrocketing, the call of the church to be light in darkness has never been more pristine.

For example, Dr. Douglas Nemecek, chief medical officer for behavioral health at Cigna notes, “loneliness has the same impact on mortality as smoking 15 cigarettes a day, making it even more dangerous than obesity.” As a result, social isolation is akin to a fish out of water gasping for oxygen. It turns out, we need community as much as we need air to breathe.

It has been said that the gospel is one hobo telling anther hobo where the bread is. For a culture starving for love, the church has a historic opportunity to usher in a gospel movement unseen since the Jesus movement this decade. The harvest is plentiful, but the workers who understand the heart of the culture are few. The church today does not need any more innovative or cooler missiological schemes, but a return to simplicity. The culture today is already saturated with sophisticated marketing strategies from Facebook and Google and other tech giants, but scarce in authenticity and hospitality.

The church does not need more innovative or cool missiological schemes, but a return to simplicity. The church should not be distracted by popular trends, but should focus instead on creating meaningful social interactions with those of its neighbors, friends and family who need the Lord. Close to half the respondents from the Cigna study said they did not have a single meaningful in-person social connection, such as daily conversations with friends, or quality time with family.

This is why the single greatest gift we still can give others outside of eternity is our time. Time is precious because it is the only commodity we cannot ever recoup. Thus, intentionally taking time to drink a coffee or share a hot meal with a friend is still the most effective gospel witness today, as it was in the times of Jesus. It may not seem that much at first glance, but if we consistently practice a gospel-centered hospitality, we’ll see one day from the other side of heaven that we have touched and changed eternity, much to our surprise and delight.

Rev. Dr. Sam D. Kim is a Harvard-Trained Ethicist and the Co-founder of 180 Church, near Union Square in downtown Manhattan. He was appointed as a research fellow in Global Health and Social Medicine at the Center for Bioethics at Harvard Medical School and part of Harvard catalyst, where he explored the inequities surrounding health, immigration, and social policies. He lives in New York City with his wife Lydia and his two sons, Nathan and Josh. His first book – A Holy Haunting: Why Faith Isn’t a Leap but a Series of Staggers from One Safe Place to Another – is set for release on April ’23 and is now available for pre-order wherever books are sold.

[3] See Star Child Question of the Month for Feb 2001 on the NASA’s Star Child website.