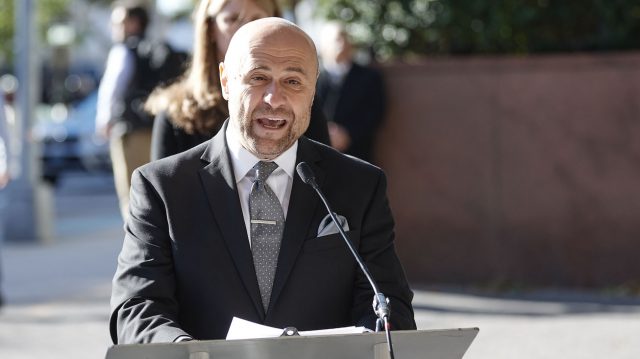 NEW YORK – On October 27, Bishop Robert Stearns and Eagles Wings’ Ministries, in cooperation with other organizations, sponsored a press conference at held by StandWithUs “to raise awareness about the virulent anti-Israel agenda of the UN Human Rights Council, whose modern-day antisemitism and obsession with Israel distract the council’s attention and resources from glaring human rights abuses in other countries.”

On that morning, Navi Pillay, Chair of the UNHRC’s Commission of Inquiry presented her latest report to the UN General Assembly. Conference organizers expected the report to be “similar to the findings of its scandal-riddled anti-Israel report, which was released on June 7, 2022.” The US State Department and bipartisan members of Congress have criticized the June 7 report and 22 nations have opposed it.

At the press conference, held at Dag Hammarskjöld Plaza, Ambassador Gilad Erdan, Israel’s Permanent Representative to the UN, received evidence of hundreds of thousands of unique submissions that were sent to the Commission of Inquiry and have been ignored, and a petition from StandWithUs with over 10,000 signatures from people around the world who are outraged by this latest UN injustice.

Bishop Stearns, founder of Eagles’ Wings Ministries and President of Israel Christian Nexus, issued the following statement at the press conference and concluded his remarks by singing the Israeli National Anthem, Hatikvah (“The Hope”):

We stand in wholehearted support with the people of Israel in their quest for justice and fairness, which is not found in the organization housed behind us. We joined today in protest of one of the most notorious and shameless examples of injustice in this generation, the antisemitic injustice that runs rampant through the deceptive and accusatory position taken continually by the UN and its so-called Human Rights Council.

Israel’s history as a people for several thousand years is unmistakably, intertwined with the land of Israel itself, including the heartland of Judea and Samaria, and her historic and undivided capital, the city of Jerusalem. Yet Israel has faced constant, relentless threats and hostility from rogue nations and members of the international community simply for wanting to live in peace in her homeland, surrounded by her neighbors.

Time and time again, the UN has refused to abandon its ant-Israel vitriol. The UN will not listen to facts, no matter how compellingly or thoroughly they are presented to this sham of an international human rights organization. This so-called Independent Commission of Inquiry claims that its purpose is to investigate the facts on the ground. But the truth is, this commission has no interest in facts, but only in demonizing bias against one nation and one people, the State of Israel. In a gross distortion of truth, the Human Rights Council has issued condemnations against Israel more times than it has done so against Iran, North Korea and Syria combined, three nations most openly known for their blatant human rights violations against women, political opponents, and religious minorities.

We come here today to advocate for the real truth in a real free world, not the false information spoon fed by international dictators and their welcome committee at the UN. Israel’s cause is just, and we owe it to ourselves, to our children and our grandchildren and the international community to call the UN to accountability.

The injustice and antisemitism must end, and it must end now, as we work together towards this future of peace, and we stand together today in hope.