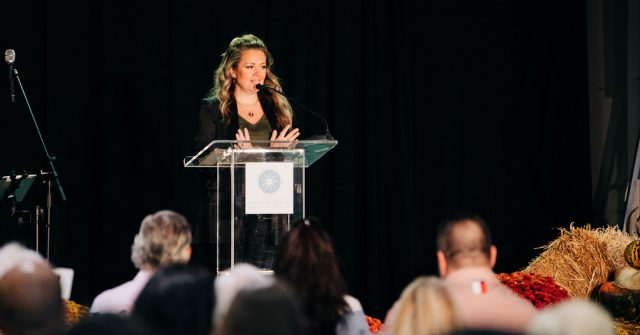 Lighthouse Pregnancy Resource Center, with locations in Hawthorne, Hackensack, Paterson, and Wayne, New Jersey, was recently celebrated as a place of grace.

On Nov. 5, Lighthouse hosted its annual fall breakfast, “Thanks-Giving for Grace,” at the Mahwah Sheraton. The event included a powerful testimony from keynote speaker Amy Ford, and a spirit of gratitude for the ministry’s staff, volunteers, and supporters.

Debbie Provencher, executive director of Lighthouse, opened the event by reading Psalm 100, which centers on the Lord’s goodness and everlasting mercy.

“Lighthouse seeks to be known as a place of grace and hope. A place where everyone is welcomed, sought after, and cared for as a person God created,” she said.

Provencher also talked about the mission of her organization in light of the landmark Supreme Court decision earlier this year.

“This year, Roe v. Wade was overturned and many rejoiced to see abortion eliminated or restricted in their state, but, unfortunately, in New Jersey and New York, nothing has changed,” she said. “Abortion is more legal and available than ever, especially through the abortion pill. Our work of making life choices possible has become even more important. We’ve made good strides toward that goal.”

At the breakfast, the keynote speaker was Amy Ford, founder of Embrace Grace, a ministry that offers practical, spiritual, and emotional support for women who are experiencing unexpected pregnancies and helps connect them to local churches.

Ford shared her compelling testimony at the breakfast. At age 19, she was faced with an unplanned pregnancy. She and her boyfriend opted for an abortion—sadly, she had been raised in a Bible Belt church, but did not see it as a place of refuge or compassion.

On the day of the scheduled abortion, however, Ford began to hyper-ventilate when the procedure was explained. Because of her mental and physical state, the abortion would have to be re-scheduled. Only it never was. By the grace of God, the young couple, together throughout high school, had a change of heart and decided to get married and raise their child.

Despite the couple’s courageous and life-affirming decision, a local church again failed to provide refuge or hope. They asked a pastor to marry them, but he declined due to their out-of-wedlock pregnancy. Although they did find another member of the clergy to perform their wedding ceremony, the wounds from that initial rejection would last a long time.

Over the years, however, Ford’s negative experience inspired her to help change the status quo. She began to wonder why the church was the last place she wanted to go to in her greatest time of need, during a crisis pregnancy: “Why did I not feel like I could go to the church and ask for prayer, wisdom, guidance, support and counsel?” She also wondered how, despite being part of a church community, she never knew about pregnancy centers and the resources they provided.

In 2012, Ford co-founded Embrace Grace, which “exists to help inspire and equip the church to love and encourage single and pregnant young women and their families.” This happens as local pregnancy centers introduce women to Embrace Grace and its church-hosted support groups and compassionate outreach programs, which include baby showers for expectant moms. Embrace Grace is affiliated with nearly 900 churches across the United States. The ministry calls these churches “pro-love” instead of “pro-life.”

“We can talk about pro-life until we are blue in the face, but without love, we are a clanging symbol (1 Cor. 13),” Ford said. “We use the word pro-love because pro-life is a stance, but pro-love is an action. And action is what is truly going to change lives.”

Ford and her husband Ryan, who reside in the Dallas-Ft. Worth area, are the parents of four children. Their son Jess, 22, whose life was spared by God’s grace, is now a pro-life speaker and writer.

In her 2021 book, Help Her Be Brave: Discover Your Place in the Pro-Life Movement, Ford challenges churches and believers to do their part in saving lives and changing our culture. At the Lighthouse Breakfast, she shared how the pastor who declined to marry her and Ryan eventually invited her to speak at his church and subsequently apologized in front of his congregation.

“He was very open about what he had done years before. He said that he had a religious spirit, a pharisee heart,” Ford said. “It was such a powerful moment.”

Through the work of Embrace Grace, Ford is hopeful that churches can work hand-in-hand with pregnancy centers throughout the nation.

“What if the church became one of the first places a girl or guy ran to when they were impacted by an unexpected pregnancy instead of the last place because of shame and guilt?” Ford asks. “What would that look like? What if we were known more for what we’re for than what we’re against?”

“What if we were known for our love to be a sanctuary, a refuge, a place where people heal, get back on their feet, to be pointed in the right direction, to find discipleship, to find a spiritual family?”

That’s exactly what has happened for Diana Organowska, who shared about how Lighthouse PRC and the Embrace Grace program changed her life. At the breakfast, she recalled how her life was in shambles as a 20-year old college student who was pregnant, scared, and confused. She had decided to get an abortion, but when her sister’s co-worker suggested that she reach seek out Lighthouse, she reluctantly visited the ministry’s Hackensack location.

“I remember walking into Lighthouse, terrified and in tears, but I met the most amazing people who would change my life completely… I chose life for my son Matthew, and I began the journey of being a mom,” she said.

Organowska credited the Embrace Grace program facilitated by Lighthouse through a local church.

“Over time, I was able to relate to the other young moms through Embrace Grace and through Lighthouse counseling sessions,” she said. “Thank you Amy Ford for creating Embrace Grace.”

Today, Organowska is the proud mom of seven-year old son and has a career working with special needs children.

“God created me with a purpose and without Matthew I could have not fulfilled this purpose. Through this whole experience, I proclaimed my faith and love for God by getting baptized…God brought me closer to Him and gave me a beautiful child who pushes me and inspires me to be better every day.”

At Lighthouse PRC, they are thankful for this young mom’s testimony, and countless others. That’s what happens at a place of grace.