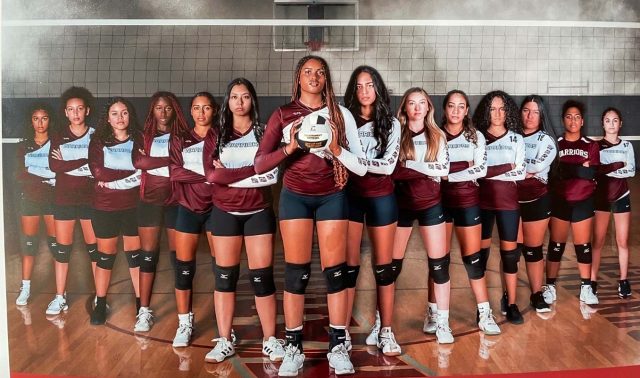 A fierce combination of grit and spirit carried the Abundant Life Academy Lady Warriors to one of the most successful volleyball seasons in school history this fall.

Abundant Life Academy, with an enrollment of only 100 high school students, finished with a record of 15-6, won the Regional Christian School Volleyball Tournament championship, and achieved impressive victories over several public school teams.

Early on, however, there was little indication that this season would be historic. The team lost four games in a row, including a disappointing match against Belleville. The young squad was disappointed because they knew their potential, but responded by “encouraging each other and praying for each other,” said ALA Administrator John Kuebler.

The Lady Warriors embarked on an 11-game winning streak. The team avenged losses to Barringer and Belleville, schools with  large enrollments and respected volleyball programs.

“Belleville was a very technical, well-trained team,” they said. “We lost the first set because our girls played in dead silence. After that first game, we told them not to play Belleville’s game, which is quiet and technical. We told them to play YOUR game. You girls are loud, proud, and cheer hard! Get back the ALA spirit and play with our personality, not theirs. We ended up pulling out the win! It felt like we won a championship!”

“We crushed it in the tournament,” said senior Claudia Lee, who was second on the team in aces and service points during the season.

According to the coaches, one of the keys to the turnaround this season came with a position change after Kuebler injured a finger in gym class and could not play at setter. The coaches moved Kuebler to right-side hitter and inserted Twiggs at setter.

“This ended up becoming our strongest lineup of the season,” they said. “It seems like everything fell into place and it was a testament to Bella’s strength in all positions on the court!”

Other highlights of the season for ALA was defeating a strong Hawthorne Christian Academy squad and winning three straight sets against Wallington and St. Dominic’s of Jersey City to advance to the final four of the Harrison Blue Tide Invitational Tournament. The school finished ranked 10th in the nation by the National Christian School Athletic Association.

“The team needed to dig deep and find the passion to win some of our big games!” the coaches said.