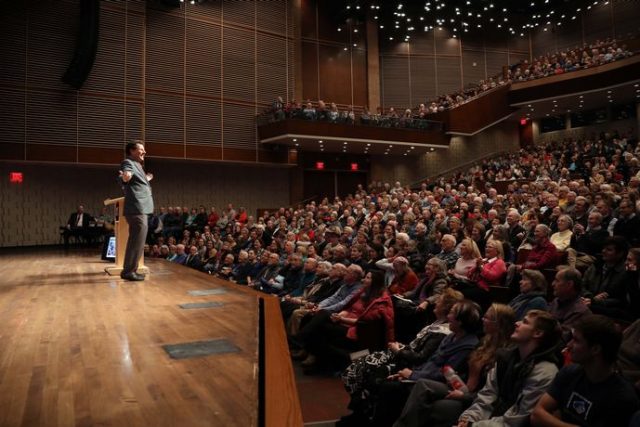 The award-winning January Series of Calvin University is coming to Wyckoff from Jan. 8 through Jan. 28. Cedar Hill Christian Reformed Church will be one of 60 remote webcast locations worldwide to broadcast one of the nation’s leading lecture and cultural arts series.

For a full list of speakers and topics, visit http://www.calvin.edu/january

A few of the notable names in the 2020 lineup include: Ann Compton, who covered seven presidents; Mitch Albom, an author, columnist, radio host, and philanthropist whose books have sold over 39 million copies; and Jonathan Haidt, a social psychologist at NYU whose last two books were New York Times best-sellers.

The 15 speakers will provide insight on issues like poverty and hunger, the global water crisis, immigration, mass incarceration, religious freedom, and big data’s inequality and threat to democracy.

Kristi Potter, the director of the January Series says the goal of the series is to cultivate deep thought and conversations about important issues of the day so as to inspire cultural renewal and the shaping of better global citizens in God’s world.

Potter says this work starts with listening, even to those with whom we may disagree. She says day two of the January Series will provide a great opportunity for attendees to see what this looks like.

“We have the opportunity to hear from two respected scientists who hold opposing viewpoints on the topic of origins. One is a six-day creationist, the other a theistic evolutionist, and both feel strongly about their views. Both actually feel the other person’s view is harming the church,” said Potter. “And yet, the two have learned to talk to rather than past one another, using respectful dialogue with the understanding that they are both Christians. This moderated conversation will serve as a model for us for how to have difficult conversations—something we aspire to foster through this series and in all of our work at Calvin University.”

While Potter says the series will dig deep into some of the complex issues facing the world today, it will also highlight the great progress being made in some of these areas. She expects it will inspire hope.

“It’s not all doom and gloom, positive things are happening. I hope those who tune into the series this coming year will leave hopeful for the future and understand how they can take steps to make a difference. And maybe that step is just being more willing to listen to one another and acknowledging one another for who they are.”

The January Series lectures will be video streamed live at Cedar Hill Christian Reformed Church (422 Cedar Hill Ave., Wyckoff, New Jersey 07481) from 12:30 to 1:30 p.m. EST Monday through Friday. The lectures are free and open to the public.

In 2020, 60 remote locations will carry the January Series—spanning 22 U.S. states, three Canadian provinces, and one site in Europe.

For more information about the January Series, contact Roy Heerema: roy.heerema@nm.com or 973-495-9630.