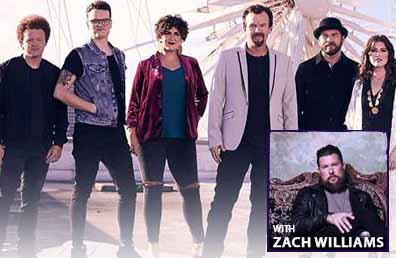 Contemporary Christian music group Casting Crowns is coming to the Prudential Center Feb. 22 as part of its Only Jesus Tour. The concert is sponsored by Star 99.1 FM.

Casting Crowns has released 12 albums and sold more than 10 million records since the band’s debut, self-titled album in 2003. Since then they have several hits, including “Lifesong,” “If We Are The Body,” and “Praise You In This Storm.”

Casting Crowns is one of the few Christian bands to perform in North Korea. The band played in in the 2007 Spring Friendship Art Festival and again in 2009, USA Today reported.

Lead singer and songwriter Mark Hall has said his fundamental message is: “I want to shake people up and help them see that Jesus is not a religion, and God is not a book.

“You can’t pray to a book and you can’t draw strength from an idea or standard. If there’s no relationship with Jesus as a person to you, you’re in trouble. It’s about life, not religion. It’s about relationships, not books.”

The concert is 7 p.m. March 24 and includes Jeremy Camp, Jordan Feliz, Ryan Stevenson, We Are Messengers, and Aaron Cole.

For more information, to purchase tickets, or to sample some of the music that may be played at the concert, click here.