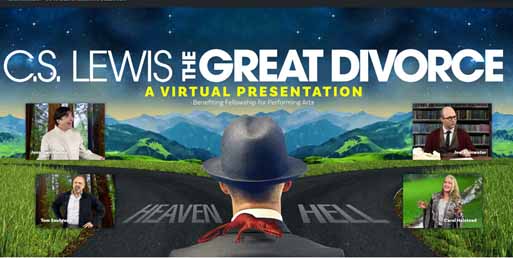 The play will be presented online from 4 p.m., Sunday, Nov. 15, through Wednesday, Nov. 18, following an invited premiere for FPA’s Fellowship Circle of supporters on Saturday, Nov. 14.

All performances are free. Donations to benefit Fellowship for Performing Arts are encouraged.

“Through the magic of green-screen technology we’ve recreated the play into an intimate online theatrical experience,” said FPA Founder and Artistic Director Max McLean. “Union restrictions require that actors be filmed individually and apart. So, we figured out a way to bring them together online with the look and feel of them performing on stage before a live audience.”

A hit in New York and on tour The Great Divorce, is about “ghosts” in hell who are offered a bus trip to heaven. There they are met by “Spirits” who invite them to stay, if each are willing to forego the unique, individual flaw that drove them to hell in the first place. The result is a clash of wills and ideas that are poignant, moving and deeply insightful.

The Dallas Morning News described it “Fiercely Funny!  C.S. Lewis at his imaginative best!”  “Recommended” by the Washington Post, which called it “a faithful adaptation . . . striking vignettes . . . packaged into a tidy, brightly designed 90-minute show…without the sermonizing!”  World Magazine said that it “raises questions of eternal significance with disarming ease.”

A New York City-based theatrical production company founded by Artistic Director Max McLean, Fellowship for Performing Arts’ mission is to produce theatre from a Christian worldview that engages diverse audiences. In addition to its annual New York season where it has produced Paradise Lost, A Man for All Seasons, Shadowlands, C.S. Lewis On Stage: The Most Reluctant Convert, The Great Divorce and Martin Luther on Trial at The Pearl Theatre and at Theatre Row, it tours in major performance venues nationwide and recently added a university tour that includes Columbia, Princeton, UC-Berkeley, Brown, Duke, UNC-Chapel Hill, UT-Austin, Penn and UVA among others. In the year prior to the pandemic, 75,000 people experienced an FPA production in New York, on tour and on campus.