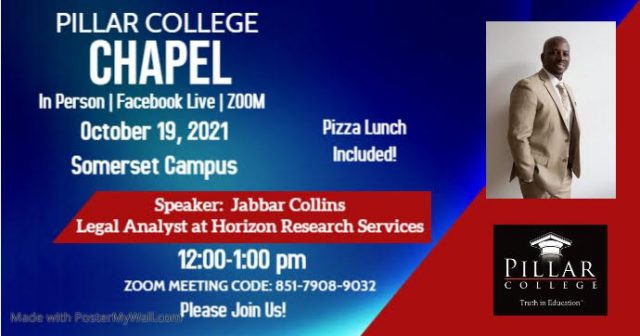 Jabbar Collins – president of Horizon Research Services, a consulting firm providing legal research and writing services to appellate and civil rights attorneys – will speak at Pillar College’s Chapel, October 19, at its Somerset Campus. In 1994 Mr. Collins was wrongfully convicted of murder and sentenced to life in prison. He spent the next 16 years of his life there, teaching himself appellate, civil, and post-conviction litigation.  While incarcerated, Mr. Collins drafted scores of successful state court lawsuits under the New York Freedom of Information law, won a federal habeas corpus petition raising complex ineffective assistance of trial and appellate counsel claims, and was granted permission by two federal judges to orally argue cases on behalf of two prisoners he assisted.

In 2010, Mr. Collins, working with an attorney he would later work for as a paralegal, won his freedom when a federal judge granted his habeas corpus petition and dismissed all charges against him based on egregious prosecutorial misconduct.  Mr. Collins then sued the City and State and along with his attorney, exposed systemic misconduct in the Brooklyn DA’s Office, ultimately winning a $13 million dollar settlement, at the time one of the highest settlements for a wrongful conviction in New York City history. His legal work following his exoneration has resulted in five other wrongfully convicted men being freed after decades in prison.  Mr. Collins’ case also prompted former Brooklyn DA Ken Thompson to run for office and establish a Conviction Integrity Unit that to this day has freed 28 other wrongfully convicted men.  Mr. Collins is scheduled to take the LSAT next month and plans to begin law school next year.