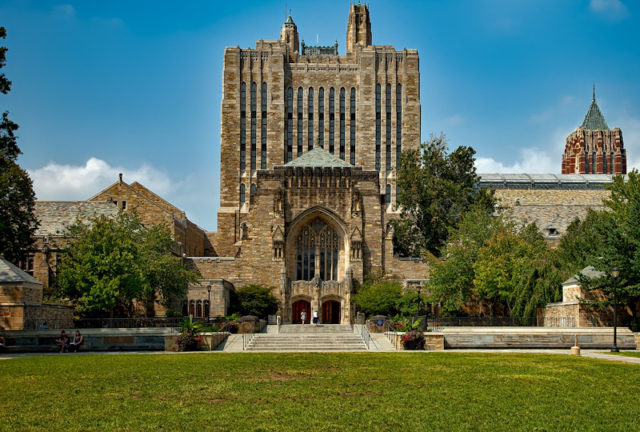 Editor’s note: The following article is reprinted with permission from Christian Union: The Magazine.‘

The shelves in Timothy Han’s dormitory room are lined with books, separated by class. Plato and Aquinas bookend the Philosophy shelf. Herodotus and Plutarch can be spotted on the History shelf. And on the Literature shelf, tucked between Homer’s fantastical adventures and Ovid’s collection of Greek mythologies, is the Bible.

Han is one of the 160 first-years who is enrolled in Yale’s Directed Studies course, an interdisciplinary study of the Western canon through the lens of literature, philosophy, and historical/political thought. The pace is fast—DS moves through about a book per class—so taking four classes out of the calendar to study the Bible is noteworthy. Students study Genesis, Exodus, Matthew, and Romans in their first semester.

Yale is not the only university to engage the Bible as a literary text—Columbia’s Core Curriculum also includes Ecclesiastes, Exodus, Deuteronomy and 1 Samuel on its literature syllabus. The Bible has been on Yale’s DS curriculum since its foundation in 1947.

“Since the DS curriculum is largely focused on the history of western thought, the Bible needs to be there—its influence is unparalleled,” explained Professor Kirk Freudenburg, who specializes in Classics and is one of this year’s Literature faculty for DS. “The main goal is to get students to appreciate the profound importance of the Bible in the history of Western culture. One would have a very hard time teaching Dante or Milton to students who had no knowledge of the Bible.”

While Han understood the importance of studying the text from a literary standpoint, he was wary of the outcome arising from discussion of Christian texts among non-believers.

“I entered my Literature class anticipating a degree of criticism, cynicism, and reduction of the text to something lesser,” he said. “However, my professor, David Quint, did an excellent job maintaining a degree of respect for the Judeo-Christian faiths while also pointing out the seeming contradictions in Scripture that have been written about for millennia.”

However, this didn’t mean completely smooth sailing—the class wrestled with reconciling God’s goodness to his actions in the Old Testament.

“There were certainly moments in Scripture that brought out skepticism and questions regarding the problem of evil from non-believers, and ready explanations prepackaged by Sunday schools from students of faith, such as Abraham’s attempted sacrifice of Isaiah. How can a benevolent God order Abraham to kill his son? Given the breadth and depth of literature on such questions, I think it was inevitable that they would have entered our discussion,” said Han.

It’s questions like these that drew the director of the program to teaching DS in the first place. Professor Kathryn Slanski has served on the DS faculty for about 14 years, and has enjoyed challenging students with to think from points of view they’ve never considered before.

“We have asked you, six times a week, what do you think about justice? Or being asked to sacrifice your son by God? We ask you, again and again and again, these really hard things,” said Slanski. “We ask you to think about what you think…and demonstrate how you got there.”

It is not only the critical analysis of the text that at times presents roadblocks for students, however.

“It’s hard for a lot of students to approach these works with the same kind of critical analytical tools that they’ve brought to Homer or Livy or Aristotle. To put the Bible under the same microscope is often a source of discomfort for various reasons—they’ve been exposed to the Bible in a religious context or a family context, [and] that brings with it a lot of weight and significance that is unique to the Biblical text,” said Slanski.

Directed Studies professors are based in a variety of departments, from Comparative Literature to Religious Studies to French. Slanski’s scholarship is Near Eastern Languages and Civilizations, and Humanities. While she is accustomed to examining the Bible in tandem with other mythological stories of the time, Slanski has grown aware that not all students are comfortable with this approach.

“As a teacher, I’ve learned to be aware that there could be 18 different anxieties looking at me from deer-in-the-headlight frightened eyes,” said Slanski. “I’ve actually found it very rewarding to begin my lecture talking about the challenges to studying the Bible. Let’s talk about what makes it hard for us to treat this text the way we do the other texts in the syllabus. Let’s honor those differences and respect them, giving them some voice in the room. This actually adds value to the work that we do by acknowledging to each other in this shared community of readership how much is at stake for people.”

For Christians in the class, studying the Bible has provided opportunity to witness to their friends outside the lecture halls. Non-Christians were also more receptive to talking about their views on faith. Ryan Bronston, who identifies as agnostic, wouldn’t change anything about the way his sections were conducted, calling them informing and engaging. He said he would be open to continuing the conversation about God beyond the syllabus.

“I haven’t really had any conversations about Christianity with classmates outside of class, but I’d really like to! I think this is due at least in part to the fact that we scrutinize over these texts in such an academically-driven fashion that we forget that we’re people with and without personal connections to religion in the first place,” said Bronston.

These conversations not only happen between students, but also with their professors.

“One of the great pleasures and privileges of teaching humanities is sharing and learning about what is important to people. And learning how to talk about God,” said Slanski. “When students are grappling with being asked to study the Bible as a text in an academic context, there are breakthroughs that happen there. Every student I have had that kind of conversation with has come out stronger because of that.”

Isabella Zou’s breakthrough emerged from the interdisciplinary nature of the course, in putting her classes in conversation with each other. Her studies of Philosophy such as Plato’s “Form of the Good,” Aristotle’s “Unmoved Movers,” and even Stoicism have revealed to her aspects of God that she first discovered through the Bible.

“[Directed Studies] has challenged me to immerse myself in uncertainties and think analytically through the swampiness,” she said, referring to her innumerable questions and incomprehension about the nature of God. “But even though I fully believe there are countless aspects of God I’ll never comprehend, this practice of reasoning has actually helped me to more fully appreciate the extent of his complexity.”