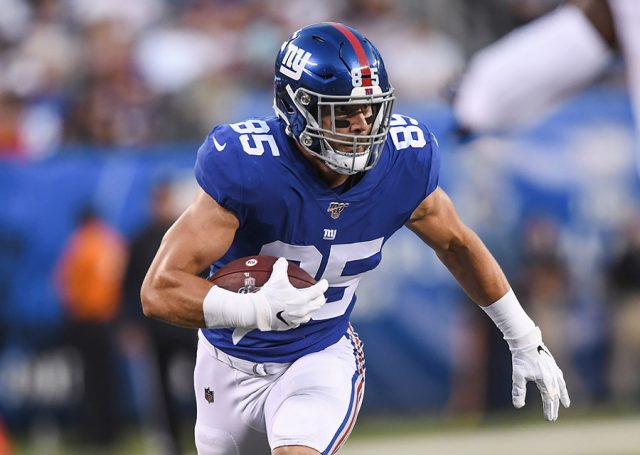 Rhett Ellison, former tight end with the New York Giants and the Minnesota Vikings, knows the difference a fellowship of Christian teammates can make. When he played with the Giants from 2017-19, Ellison’s faith grew as he and teammates studied the Bible, prayed together, and strengthened and encouraged each other during the ups, downs, and rigors of life in the NFL.

Today, Ellison is the Bergen County Area Representative of the New Jersey Fellowship of Christian Athletes (FCA). He strongly identifies with the mission of FCA, which is “see the world transformed by Jesus Christ through the influence of coaches and athletes.”

“When I look back at my career in sports, it was not the fame, the fortune, the achievement, the approval—the greatest thing that came from it was a relationship with Christ,” he said. “And that is what FCA is about—bringing the gospel to athletes and coaches in a way that they can apply to their lives.”

Ellison recently shared his testimony at the Bergen County Chapter of the New Canaan Society and at Cornerstone Christian Church’s Monday Night Football Men’s Event. At both events, Ellison, who caught 119 passes for 1,189 yards and seven touchdowns during his pro career, told the men how his purpose, worth, and identity were once synonymous with football. His dad, Riki Ellison, played linebacker for ten seasons in the NFL, winning three Super Bowls with the San Francisco 49ers. Despite the athletic pedigree in the family, however, Rhett and his dad did not have a close relationship when he was growing up because his parents divorced when he was five-years old.

“I saw him maybe one week, two weeks out of the year, sometimes not at all,” he said. “Football was the only way I had a relationship with my dad; people would assume that I had a very comfortable childhood with an NFL dad; in reality, after the divorce, my family was broke, and we were fortunate to have a friend that allowed us to live in a garage.”

Ellison’s mom eventually remarried and his family had a more stable situation. The standout high school athlete followed his dad’s path to a pro football career by playing at his alma mater, the University of Southern California. In 2012, Ellison was drafted in the fourth round (128th overall) by the Minnesota Vikings.

“I noticed at a very young age that my identity was always attached to [my father’s] identity—that relationship pretty much drove football in my life,” Ellison said. “Football became my purpose, it’s where I got my worth…There were things I loved about playing football, I loved hitting people as hard could, I loved catching the ball…but my motivation was fueled by fear. I was so afraid of who I would be if I didn’t have football—that I wouldn’t be worthy to be [my dad’s] son if I didn’t play football.”

Things began to change when Ellison became a Christian. That happened when he met his soon-to-be wife, fashion model Raina Hein, runner-up of season 14 of America’s Next Top Model.

“My wife planted that seed in my heart,” he said. “When I met her, I knew she was the one and I didn’t want to repeat what my parents went through. I wanted to make sure that I could be the best husband I could be and that our marriage was as strong as it possibly could be. And she made it very clear that if this was going to happen, our marriage had to be built on the foundation of Christ.”

Although Ellison was a believer and the couple applied biblical principal to their marriage, it wasn’t until he suffered a career-threatening injury that his faith and trust in Christ blossomed. In a late-season game in 2015 against the Green Bay Packers, Ellison suffered a torn patella.

“In that moment, my life came crashing down. What I thought my purpose was gone,” he said. “I went into a time of darkness, a time of despair.”

But in that darkness, “God was my light. He surrounded me with people that were rooted in Him. He surrounded me with people that didn’t abandon me. Jesus went to the cross so I would never be abandoned again. And my life was transformed, my heart was transformed in that process. And, as a bonus, God blessed me with another four years in the NFL. He blessed me with a chance to play football with my identity rooted Christ and not just in my performance.”

“The biggest thing that shifted was a mindset of gratitude instead of fear. I was so grateful for what Jesus did for me. I was so grateful for the grace I didn’t deserve, that football became a gift. It became an opportunity, a platform to glorify him, to honor him, to serve him. And it was no longer a burden.”

Elllison said this mindset of gratitude transformed every area of his life and every relationship, especially with his dad: “I have nothing but love and gratitude for the dad he was able to be and currently is.”

After recovering from the knee injury, Ellison played one more season with the Vikings before signing with New York in 2017. With the Giants he was part of Bible studies that included up to forty teammates, he said. He also developed a deep hunger for the Word of God, podcasts and YouTube videos that featured Christian apologetics, and serving. On his off days, Ellison would drive to Penn Station in Newark, where he handed out sandwiches and even started a Bible study.

Today, as the director of Bergen County FCA, Ellison is looking to instill those same virtues in local high school athletes and coaches. FCA seeks to make disciples by “engaging, equipping and empowering coaches and athletes to know and grow in Christ and lead others to do the same.”

At a North Jersey FCA kickoff event in September, Ellison talked about how he wished he had the opportunity to be part of a FCA huddle group in high school and how impacting coaches and athletes for Christ can change the culture of a school, of a community.

“The impact that a coach has on an athlete is life changing. It’s the same with athletes and the impact they have on their peers,” he said. “FCA is about creating a community, a bond…it is a team of individuals that help keep you in God’s grace, keep you accountable, and keep you in the gospel.”